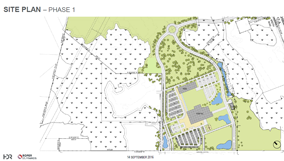 Energy efficiency, patient convenience and the ability to expand in the future were the three biggest factors shaping the layout of the new Roper St. Francis Berkeley Hospital campus.

Roper St. Francis officials have approved the site plan and are moving forward with the buildings’ design.

“The site is large and will allow us to continue to grow with the community,” said Scott Broome, chief executive officer of Roper St. Francis Berkeley Hospital. “We also have the opportunity to take advantage of the beautiful natural features of the land, which we’ll protect and preserve for the enjoyment of patients and visitors.”

The majority of patients who come to the site will not be staying overnight because so many services are offered in the outpatient setting, he said. The campus has been arranged with that in mind, Broome said. Patient parking and entrances will be easy to see and to access.

Broome said visiting the future hospital campus will be more like going to an outdoor retail center; you can park closest to the stores you want to visit, he said.

“We want people to be able to go to the part of the campus they need to go to without having to negotiate the whole campus,” he said. “We’re thinking about how patients use healthcare and are trying to deliver what they want so it’s as easy as possible to navigate to where they need to go.”

The site’s main entrance, as well as two additional entrances, will be on Highway 176 and will be supported by a traffic signal. The facility also will be accessible through an entrance from Highway 17-A.

Energy conservation was another key factor in the site’s layout. Architects considered the sun’s daily trajectory and prevailing winds. The buildings will be oriented such that the sun passes across the buildings’ roof tops, thus improving energy use. Buildings also are nestled inside the largest piece of contiguous property that isn’t encumbered by wetlands, Broome said.

The property’s wetlands will be visible throughout the new Roper St. Francis Berkeley Hospital, and the site layout intentionally provides for as many vistas as possible.

“We’ve known from the start that we wanted this new campus to provide ample green space,” Broome said. “We want Roper St. Francis Berkeley Hospital to be a place where patients come to be physically healed and for our wonderful natural surroundings to help in their recovery.”

The runoff that is carried by this .61 acre ditch will be diverted to a parallel pipe culvert to ensure proper water flow during both normal and high water scenarios. As part of its application, Roper St. Francis has offered to acquire credits from available wetland mitigation banks.

The permit area is a small portion of the land owned by Roper St. Francis. In total, nearly 40 acres of wetlands exist on the nearly 100-acre campus. The project’s engineers considered all options to avoid wetland and tributary impacts, and this option was the least disruptive to the site, Broome said.

“We had a few goals when arranging this campus, including proximity to U.S. Highway 176 for the benefit of patients and emergency vehicles,” he said. “This was the largest piece of contiguous land where there was no freshwater wetlands. We made every effort to be as least invasive as possible and demonstrate strong environmental stewardship.”

The main hospital building and emergency room will be closest to the entrance off Highway 176 in an effort to make it easy to find critical services.

“We don’t want people coming to the campus for an emergency to have any difficulty finding the emergency room,” said Broome.

Roper St. Francis hopes to have schematic designs that will detail the buildings’ layout by this fall.

Roper St. Francis has hired Turner Construction as the project’s construction management firm. After an exhaustive request for proposal process, Roper St. Francis selected Turner based on its extensive portfolio of work inside and outside of healthcare, as well as in the community. Turner has been responsible for building several projects associated with Boeing South Carolina’s North Charleston facilities.

The hospital is expected to open in 2019.